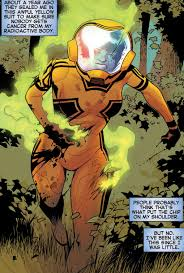 Q: What happens when a radioactive teenage girl's containment clothing is breached?
A: Nothing good!
Advertisement:

Some powers cause their users to become too dangerous to be in the vicinity. Instead of others wearing Hazmat Suits or other more or less fantastic protection, the person with the dangerous power wears a suit to prevent it affecting others. Said suit may also function as a Power Limiter or Powered Armor if that helps control the power.

Clothing Damage is an issue of which the user ought to be aware. Hence, Containment Clothing is often made quite rugged, which may in turn enable it also to serve as armor for the wearer. Other features are optional, such as vents which enable the uncontrolled power to be released in controlled, directed bursts.

If the suit isn't solely to protect the world around them, some characters may slip into a full Super-Power Meltdown if their clothing is breached.

The suit may also serve as a variant of Sealed Evil in a Can or Sealed Good in a Can.

Might be a wardrobe choice for a Walking Wasteland, Poisonous Person, Nuclear Mutant, or someone suffering from Power Incontinence. Contrast Phlebotinum-Handling Equipment. See also Clingy Costume.