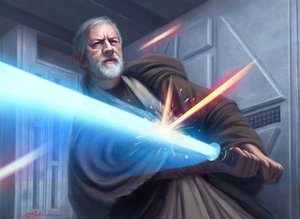 "Did... Did you just cut my bullet in two!?"
— Aimee Matchlock, Bravely Second
Advertisement:

Parrying bullets is when a character uses a sword (or other melee weapon) to block gunshots. Characters capable of this are able to wield their blade with such speed and precision that they can swat bullets out of the air — in extreme cases, even emerging from automatic weapons fire completely unscathed. Sometimes this is portrayed as a feat of pure skill, though more often it's made possible by Super Reflexes or Combat Clairvoyance. In any case, it's certainly an indication of Implausible Fencing Powers.

Generally the purview of the Master Swordsman, the ability to parry bullets is a good way to even the odds in Guns vs. Swords. Nor is it limited to regular bullets — it also applies to Ray Guns, Energy Balls, or anything else that deals death at velocities too high for normal human beings to defend against. In some cases, a special blade might be needed to withstand the rigors of this sort of use.

See also Dodge the Bullet and Bullet Catch. In extreme cases, this can be used to deflect incoming fire back at the shooter, becoming a sort of Attack Reflector—and if the attacker then deflects it back at the player in a video game, you have yourself a Tennis Boss. May involve a character deflecting bullets by spinning their weapon. For cases where someone deflects a bullet by firing at it, see Shoot the Bullet.

Multiple bullets mean nothing to the master swordsman Goemon.

Multiple bullets mean nothing to the master swordsman Goemon.