This page contains unmarked spoilers for this film, Logan and Deadpool. You Have Been Warned! 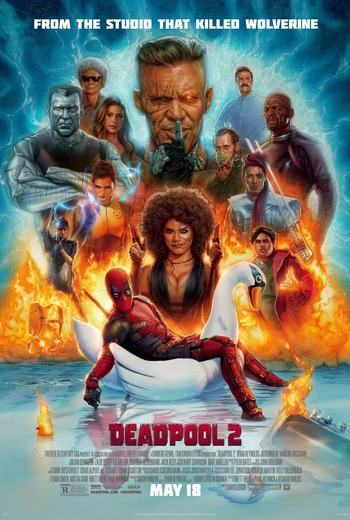 ...and when I pray to God, all I ask is
can beauty come out of Ashes?

note Clockwise from top center: Cable, Zeitgeist, Peter, Bedlam, Shatterstar, Firefist, Domino, Deadpool, Yukio, Negasonic Teenage Warhead, Colossus, Blind Al, and Vanessa.
"I ain't letting Cable kill this kid, but I can't do this alone. We're going to form a super-duper fucking group. We need them tough, morally flexible, and young enough to carry their own franchise for 10 to 12 years."
— The Merc with a Mouth
Advertisement:

Deadpool 2 is a 2018 superhero comedy film, and the sequel to 2016's Deadpool, based on the Marvel Comics character of the same name. Directed by David Leitch (John Wick, Atomic Blonde) and written by Rhett Reese & Paul Wernick (who also wrote its predecessor). It is the eleventh installment of the X-Men film series. An extended version titled Super Duper Cut was released on August 28th, 2018 that contained 15 minutes of additional scenes involving more action and Character Development.

After undergoing a tragic loss and joining the X-Men on a mission, Wade Wilson/Deadpool (Ryan Reynolds) winds up bonding with troubled young mutant Russell Collins (Julian Dennison) and gets both of them stuck in a Hellhole Prison for Mutants. Complicating things is a Time-Traveling Cyborg from the future named Cable (Josh Brolin) who has shown up to kill the boy for mysterious reasons.

And now, despite his better judgement, the Merc with the Mouth's going to try to do what's right and stop him. Along the way, Wade will reunite with X-Men Negasonic Teenage Warhead (Brianna Hildebrand) and Colossus (Stefan Kapičić), form a legally distinct team of mutants to help him, including Domino (Zazie Beetz) and a bunch of other potentially franchisable character actors (Terry Crews, Bill Skarsgård, Lewis Tan, Rob Delaney), and maybe, just maybe, convince Disney to not cancel his film series after they buy 20th Century Fox.note ...Or at least reconsider his application

A short to promote the film, No Good Deed (also directed by Leitch), was shown preceding Logan in U.S. and Canadian theaters in 2017.

A PG-13 cut was released in theaters on December 12th, 2018, entitled Once Upon a Deadpool, with new footage shot to replace scenes that are inappropriate for younger audiences. In this version, Fred Savage has been tied up and forced to reprise his role as the grandson from The Princess Bride as Deadpool tells him a sanitized version of the events of his second movie. The re-release of the film was also used to raise money for the charity Ryan Reynolds supports, "Fuck Cancer" (temporarily renamed "Fudge Cancer" during the film's run), with a dollar being donated to it for every ticket sold. It was eventually revealed the PG-13 cut was mainly created to secure a release in the lucrative Chinese market, as Western R-Rated movies are not approved by the censorship board in their original forms. The film officially passed Chinese censorship and was released there on January 25th, 2019.

With the Disney-Fox merger, the franchise's future became somewhat uncertain in spite of the commercial and critical success of both movies. Originally, an X-Force film directed by Drew Goddard was slated to directly follow this movie, with a focus more on the other characters in addition to Deadpool, but Deadpool co-creator Rob Liefeld has since indicated that the project was no longer moving forward. A new Deadpool movie was eventually confirmed by Ryan Reynolds to be in development in December 2019, after the merger completed. Marvel Studios is taking over the franchise from this point onward, with Fox's Emma Watts (who oversaw development of the first two films) no longer being involved

, ceding creative control over to Kevin Feige. On November 20, 2020, it was announced that the third film would be written by Emmy Award-winners Wendy Molyneux and Lizzy Molyneux-Logelin, best known for their work on Bob's Burgers and their own show The Great North. On March 11, 2022, it was announced that Reese and Wernick will also be returning to write, while Shawn Levy, who previously worked with Reynolds on Free Guy and The Adam Project, was confirmed to direct. The Reynolds-led movie is confirmed to be R-rated, a first for a Marvel Studios production, and will be at least partially set in the Marvel Cinematic Universe, although it remains to be seen if it will be a reboot of sorts or a true sequel to Deadpool 2.

open/close all folders
Tropes Specific to the Movie

Buuut it ends up being invoked right after Dopinder plows into the Headmaster with his taxi. 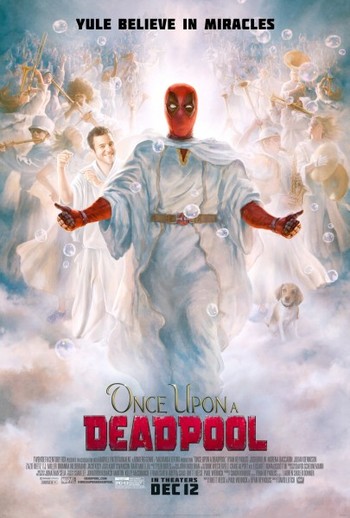 [shoots Weapon XI in the head]
Deadpool: Hey, it's me! Don't scratch! Just cleaning up the timelines. Love you!
Feedback

Example of:
Admiring the Abomination