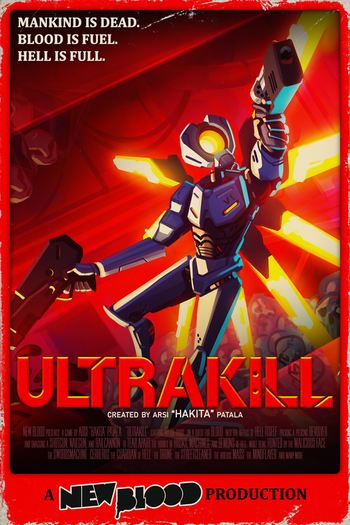 MANKIND IS DEAD
BLOOD IS FUEL
HELL IS FULL
Advertisement:

ULTRAKILL is a Stylish Action retro-style First-Person Shooter made by Arsi "Hakita" Patala and published by New Blood Interactive. You play as V1, one of the robotic survivors of a war where combat robots that run on blood exterminated humanity for fuel, and find themselves fresh out. But there is still one last source left to tap into: all the demons and damned souls in Hell.

Gameplay hearkens back to the lightning fast shooters of old and places emphasis on movement, dodging attacks, and unbridled aggression in arena-style levels. V1's health can only be restored by showering in the blood of enemies, necessitating damaging foes at close range. Along the way, killing foes in varied and stylish ways will grant points that V1 can spend on weapon upgrades.

The game's prologue and first act were released in Early Access on September 3, 2020, and a free demo is available on Steam