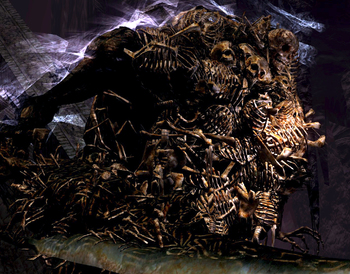 Some zombies are different. So different that the human mind cannot even begin to comprehend what it really is.

The very nature of an Eldritch Abomination defies the natural laws of the universe. Therefore, an undead might count as one if the laws of said universe dictate that being 'dead' is considered a fundamental state of existence (for example, souls which 'live' in the afterlife are considered 'dead', depending on how different the souls in question are). In such contexts, being an undead might be an oxymoronic, abominable state, as it means the entity is 'dead' and yet somehow 'alive' as well.

Basically, it might as well be the origin for Schrodinger's Cthulhu: if Death is personified as an entity capable of thoughts and actions, then is it part of the living, or of the dead? If a dead being is capable of influencing the world no differently than when they were alive (assuming they ever lived), then what constitutes being 'alive' or being 'dead' for them?

If it is even possible to kill such entities, then perhaps it is best that you don't, for what would happen if you slay something which could be death itself? Even if it isn't The Grim Reaper, then imagine just how horrible this thing truly is if death itself could not face it directly and win on the first try.

Undead Abominations are often the more common breeds of undead turned Up to Eleven, including ghosts, zombies, skeletons, mummies, vampires, Frankenstein's Monsters, even apparition-esque fairies such as banshees and dullahan. Undead Abominations are non-euclidian entities which make these various monsters look like inferior, Lovecraft Lite xeroxes in comparison. Liches are also extremely common candidates, especially when they are extremely powerful, difficult to destroy or have few restrictions on their ability to resurrect themselves, and have few or no restrictions on their ability to act on a large scale.

The Zombie of Zombies, the culmination of Swan's ritual and a monstrous being of unimaginable horror.

The Zombie of Zombies, the culmination of Swan's ritual and a monstrous being of unimaginable horror.