Warning! This page contains unmarked spoilers! You Have Been Warned. 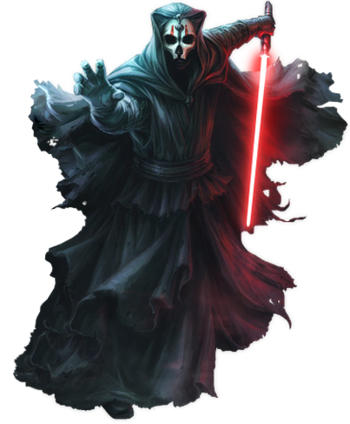 "I… am the inevitable, the end of all things. And you… are now mine."
"The truth, is that the galaxy, the universe, is far larger than this worthless ball of dirt. And all of it… shall die. Sacrifices to my hunger. Join me… bow before me as my apprentice, and you shall bear witness to the end of all things."
Advertisement:
The main antagonist of Jaune Arc, Lord of Hunger, Darth Nihilus is a legendary Sith Lord who sought to consume all life in the galaxy.

He was once a Force-sensitive human who became a Jedi under Revan's tutelage. When the Mandalorian Wars broke out, he was among those who left the Jedi Order and joined the Revanchists in their campaign against the Mandalorian Neo-Crusaders. The horrors he witnessed on the battlefield caused him to become tainted by the Dark Side and he developed a borderline-obsessive hatred for the Mandalorian race as a whole. This led to his fall to the Dark Side, and he eventually became no better than the Mandalorians he was fighting against.

During the Battle of Malachor V, he was transformed by the mass shadow generator into a parasitic Force entity whose very existence is dependent on constantly draining the Force out of every living thing he encounters.

Following the end of the Mandalorian Wars, the former Jedi was found hiding out in the ruins of one of Malachor V's battlefields by Darth Traya. Traya recruited him into her Sith Order and dubbed him "Darth Nihilus". The newly-named Sith Lord would then go on a rampage across the galaxy, draining the life force from entire planets and nearly wiping out the Jedi Order. He seemingly met his end when the Jedi Exile Meetra Surik tracked him down and slew him aboard his flagship, the Ravager. However, this would not be the end of the Lord of Hunger. Unbeknownst to all, Nihilus had bound his soul to his mask prior to his death, enabling him to continue existing as a spirit long after the destruction of his physical body.

Thousands of years later, Nihilus' mask found its way onto the world of Remnant, where it would eventually come into possession of a young man named Jaune Arc.

"For the Republic! For Revan!"

Revan's enigmatic protégé who studied at the Jedi Enclave on Dantooine prior to the outbreak of the Mandalorian Wars. When Revan left the Jedi Order to join the war on the Republic's side, his student followed him and became one of the Revanchists' most renowned warriors. However, his exposure to war slowly pulled him into the Dark Side's influence until he secretly became a Dark Jedi consumed by his hatred of the Mandalorians. Following the Battle of Malachor V, Revan's apprentice was thought to have perished alongside everyone else caught in the mass shadow generator's gravity vortex.

As a Force Wound

A living wound in the Force created from the activation of the mass shadow generator combining with the deaths of nearly every person on Malachor V. The result is a Humanoid Abomination overcome with an insatiable craving for Force energy. After spending an unknown amount of time marooned on Malachor, he was discovered and rescued from the dead planet by Darth Traya, who named the Force entity "Darth Nihilus" and inducted him into the Sith Triumvirate.

After learning how to absorb the Life Energy of those around him, Nihilus eventually supplanted Traya as the leader of the Sith Triumvirate and led the remaining Sith from the bridge of his flagship Ravager. During this period, he exterminated nearly every Jedi in the galaxy and stripped entire planets bare of all life. At the end of the Dark Wars, he was lured into a trap above Telos IV and killed by a team consisting of the Jedi Exile Meetra Surik, his former apprentice Visas Marr, and the new Mandalore. Upon his death, Nihilus Ascended to a Higher Plane of Existence as a Force ghost forever bound to his mask.

As a Force Ghost

"You were to protect her, but instead you hurt her. All because you were too weak. You know what you must do to no longer be weak."

The current form of Darth Nihilus. He's a Sith spirit who uses his mask as a Soul Jar to keep himself tied to the mortal realm. He acts as the primary antagonist for most of the story, giving Jaune his Force-sensitivity and slowly corrupting him to the Dark Side.

"You… misunderstand. Taking Jaune's body was the goal. Now that I have returned, I have no need for insidious plots or machinations. I have no grand ambitions of vengeance or chaos like the others who attacked this school. All I am here for… is to feed. On your magic, on your life. On all life on this insignificant, backwater planet. For I am Darth Nihilus, Lord of Hunger, and this world is MINE to consume!"
The Lord of Hunger's new physical form. After driving Jaune past the Despair Event Horizon in "Destiny", Jaune loses the will to continue resisting Nihilus, allowing the Sith spirit to finally possess his body and come Back from the Dead.

The Mask of Darth Nihilus 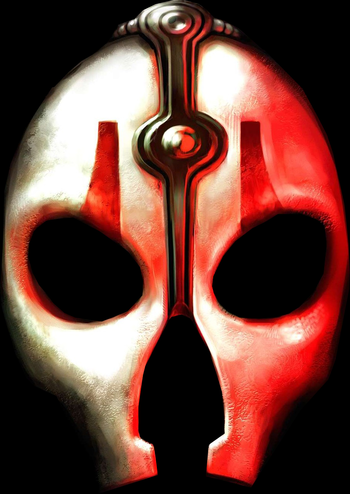 The Mask of Darth Nihilus sat in Jaune Arc's locker, alone and unused, piled under Jaune's gear. While Jaune still had the willpower and spirit to willingly set the mask aside, the mask would not be ignored. It would not let Jaune escape its grasp.
Darth Nihilus's iconic mask which he used to store his soul. After his death, the mask became a source of myth and legend. Through a series of events, it eventually ended up on Remnant and fell into Jaune's hands.
Darth Nihilus' projection 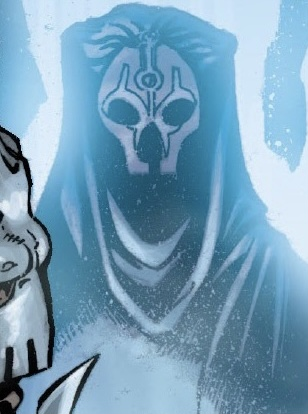 And so, using what little energy he was able to regain over his years in hibernation, Nihilus projected his soul from the mask, summoning a ghost of the Force.
A ghostly apparition created and projected from Nihilus's spirit inside his mask. In "Legends", Nihilus summons it twice, first to kill Nariel Pridence and again to attack Sando's Boys and the Apex Society.