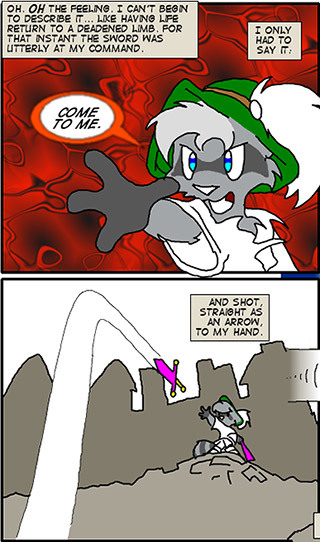 When a character has need of his signature weapon, or any other handheld item, he sometimes has the option of summoning it even if it's not nearby. This is usually an explicit power of the item itself, and is probably the most common power in magic weapons after absurd sharpness. Otherwise, it's something that particular character can do via telekinesis. A mundane equivalent can be achieved by attaching a line to the item so that it can be reeled in.

The target object may teleport to its master's location instantaneously, but more often it will physically fly there, causing a delay between summons and appearance and potentially wreaking havoc to anything that happens to be in the way. The effective range varies.

Expect overlap with Loyal Phlebotinum and Empathic Weapon, and maybe Clingy MacGuffin. Do not, however, confuse with Hyperspace Arsenal. For a weapon that automatically returns when thrown, see Boomerang Comeback. See also Precision-Guided Boomerang and its one-way equivalent, Throwing Your Sword Always Works.

If the weapon can fight as well as travel to its owner then it's a Flying Weapon. Compare Spontaneous Weapon Creation.

Examples with summoning as a property of the item:

Examples of summoning as a power of the individual: