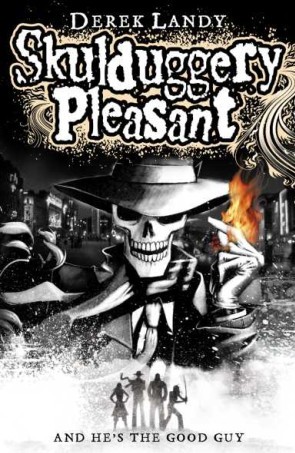 Skulduggery Pleasant is a book series written by Derek Landy. Phase 1 of the series consists of nine novels plus a spinoff novel and a short story collection, the final installment of which was released on August 28, 2014. Phase 2 of the series began in June 2017 with Resurrection.

The books revolve around Skulduggery Pleasant, "the Skeleton Detective", a sorcerer who has been dead for over three hundred years and now lives as a reanimated skeleton, and his sidekick, 12 year old Stephanie Edgley.

When Stephanie's uncle, famous horror writer Gordon Edgley, dies, she is left both his mansion and his fortune. But following the reading of his will, and the sighting of a strange man in an overcoat, she starts to discover the world her Uncle was really involved in: the books he wrote weren't as fictional as their fantastic plots let on, as becomes clear through the mounting pile of strange events she witnesses, starting with a break in at the mansion. Determined to find out what's going on, she enlists the help of Skulduggery Pleasant, wisecracking detective, to show her the new world she has stumbled upon: magic.

Stephanie soon finds herself drawn into the crazy underworld of sorcery that exists within the undercurrents of Ireland as she discovers her own magical ability and becomes partners with Skulduggery Pleasant, even taking on the name Valkyrie Cain. As she faces the wonders and terrors of the magical world, Valkyrie soon discovers that sometimes magic's not all that it's cracked up to be.

Now has a character sheet, as well as a Shout Out page.

Examples from both series: