Magic Is a Monster Magnet 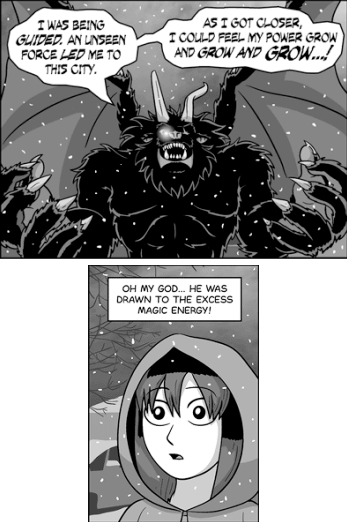 The downside of living in a Place of Power.
"If there are any to see, then I at least am revealed to them. I have written Gandalf is here in signs that all can read from Rivendell to the mouths of Anduin."
— Gandalf, The Lord of the Ringsnote ...after magically lighting a campfire, the sort of thing any level-1 mage can do in most role-playing games
Advertisement:

A Sub-Trope of Power at a Price and Weirdness Magnet where magic (or some other power or gift) attracts attention from things you would prefer to leave you alone, such as Eldritch Abominations, The Heartless or Demons. Or perhaps the local Super-Persistent Predator thinks wizards are especially tasty (and have a soft, chewy center.)

Usually this is due to magic making you Supernaturally Delicious and Nutritious, especially to a Mage-Hunting Monster, but not always — the monsters may want to enslave you because The Force Is Strong with This One, or simply be irritated that the Puny Earthling is meddling with Things Man Was Not Meant to Know.

Compare with Artifact of Attraction and Magnetic Medium. Contrast Supernatural Repellent for those things that, well, make the supernaturals and monsters go away. See also Encounter Bait, Magnetic Plot Device, and Supernatural Sensitivity (for the ability to sense magic). Invoked and exploited examples count as a type of Meta Power, as it works by attracting those with powers towards the user.