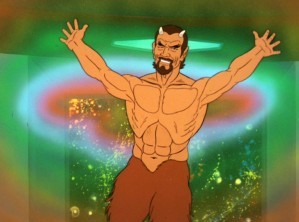 "Free LSD for everyone!"

The Enterprise accidentally breaks into an alternate universe, one in which magic is real, and are immediately greeted as old friends by a satyr-like figure named "Lucien" who brings them down to his planet to show them the wonders of magic on his planet, Megas-Tu.

Then, some Puritans show up to put them on trial for past misdeeds and reveal that the jolly "Lucien" has another name that's more familiar to them.