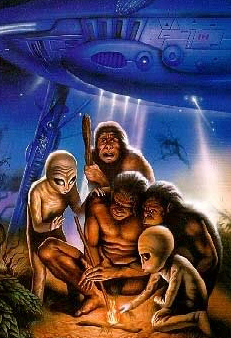 Tomorrow's lesson: clubbing your enemies with the sticks.
Mary: Did you build the Pyramids?
Dick: Only the one in Las Vegas.
Mary: What about Easter Island?
Dick: Easter Island was a practical joke that got out of hand.
— 3rd Rock from the Sun, "The Thing That Wouldn't Die: Part 1"
Advertisement:

Science Fiction trope wherein ancient locations, legends, gods, and creatures from ancient myth are connected to alien visitors from a radically more advanced civilization. This trope includes that these aliens influenced our history in some way, mostly through technological advances. Often these aliens are sufficiently advanced.

When this trope kicks in, expect various myths to be related to aliens. Everyone knows about Clarke's Third Law: the many legends of magic, gods, beings coming from the sky and the like were based on alien technology that we could not comprehend at that time.

Proponents of this theory also espouse that ancient construction projects like the pyramids and Stonehenge are clearly too advanced and a little too fantastic for ancient man to have constructed without help from a more advanced civilization. Or that since there are pyramids in the Americas, Egypt, and China... you guessed it, they all got their idea from aliens. Other popular sites include the Moai of Easter Island and the Nazca Lines.

Popularized by Erich von Däniken's 1968 book Chariots of the Gods? and its various sequels, which stridently insist that a careful blend of selected archaeological evidence will reveal that this very scenario happened in reality. The Real Life evidence for this is little but if it's brought up in fiction, expect these theories to be always right on the money. After all, it's not like either aliens or ancient humans would be interesting enough to write fiction about on their own, without them interacting, would they?

This theory is often crossed over with Atlantis. Essentially runs on God Guise; contrast with And Man Grew Proud. May result in Boldly Coming. If the unknown ancestors sport special abilities which aren't derived from technology, compare Our Ancestors Are Superheroes. Usually overlaps with Neglectful Precursors, as the aliens are generally implied to have lost interest in humans and/or concluded we're unworthy successors, ages ago. Sub-Trope of All Theories Are True. See also Beethoven Was an Alien Spy, for individuals rather than entire societies.