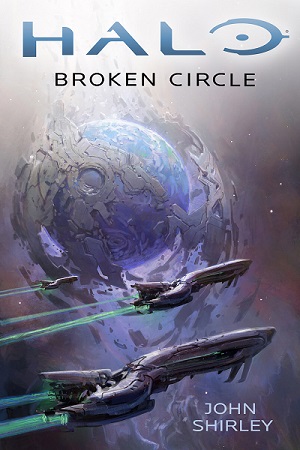 Halo: Broken Circle is a book in the Halo franchise written by John Shirley in 2014. Unlike previous novels, there are no humans as the Covenant are the sole focus here, with attention primarily on the Sangheili (Elites) and San'Shyuum (Prophets).

The first half of the novel takes place during the beginning of the Covenant, just after the Writ of Union has ended the war between the Elites and the Prophets. The two species had warred over artifacts left by the ancient Forerunners, but have since called truce and formed an interspecies alliance that would become the Covenant. With the Prophets as the Covenant's leaders and the Elites as their warriors, both seek to follow the Forerunners to a spiritual ascension known as the "Great Journey".

However, an Elite splinter group led by Ussa 'Xellus continues to fight against the Prophets, under the belief that their Great Journey is false and the Writ of Union nothing more than shameful surrender. Ussa sees his chance when a follower of his tells him of a secret Forerunner world, where his followers might be able to escape and live free from the Covenant.

Meanwhile, the Prophet of Inner Conviction, Mken 'Scre'ah'ben, prepares to lead an expedition to the Prophets' old homeworld, in hopes of finding females who will emigrate to the Covenant and increase the gene pool of its Prophets. But he too has his doubts about the Great Journey, and his unorthodoxy (and moral backbone) has made him enemies among the other Prophets, rivals whom he fears might see this expedition as the best chance to kill him in secret.

The second half takes place after a Time Skip of over 3,000 years, during the beginning of the Great Schism between the Elites and Prophets, and follows Mken's and Ussa's descendants.