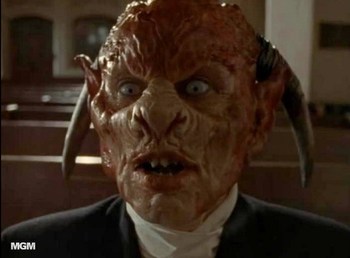 The Control Voice: In a world filled with darkness, Father Anton Jonascu's faith has long been a beacon of light for those in need. But now the good father finds himself at a crossroads, in danger of losing his way.

Aliens who look like demons grant a disillusioned priest the power to heal and ask him to be their representative. Though initially willing given the good he can do, the priest learns the aliens are not so benevolent.

The Control Voice: From the dawn of time, people have believed that angels walk among us. Some believe that demons are also in our midst. But who's to say exactly what form either will take? They could be your spouse, your boss at work, even the person sitting with you... right now.

Corner of the Tropes: