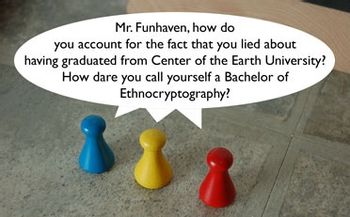 Two or more characters say the same thing at the same time.

The Creepy Monotone this naturally creates make this a favorite characteristic of the Hive Mind (especially ones linked psychically), Creepy Twins and people under Mass Hypnosis. It also turns up when reciting a well-known text like a Badass Creed or In the Name of the Moon speech, where it's intended to show unity, strength in numbers, and discipline. A common enough joke is mixing this with an Expospeak Gag (especially coincidentally).

Comics demonstrate this by drawing a Speech Bubble with two or more tails leading to the speakers.

Taken for granted in musicals, where it happens constantly during Crowd Songs and duets.

Two characters with Belligerent Sexual Tension will sometimes do this and unwittingly demonstrate that they're not that different. If another character lampshades this expect them to invoke this trope again as they both shout "We're not dating!"

Also common is the comedic subversion; two characters attempt to do this, but fall out of sync or mess up their lines. Bonus points if they then argue about who was supposed to say what, or about how one isn't sticking to the plan, or if they lampshade that speaking in unison is more trouble than it's worth. This particular variant also can show up with Finishing Each Other's Sentences and similar tropes.

Compare Voice of the Legion, where one character speaks with the voice of many, and I Say What I Say, where two people say the same thing because they're the same person (transplanted in time or from alternate universes). See also Finishing Each Other's Sentences, Finish Dialogue in Unison, and Repeat After Me.