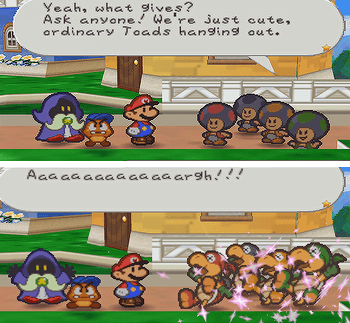 There are many things that go bump in the night, secure in the knowledge that their unholy powers can trick the human eye into blindness, allowing them to live among and prey on humanity with impunity. But their supernatural (and at times inherently evil) nature means that no matter how complete the deception, they can never truly hide what they are. They may fool the mundane senses, but not the spiritual ones; inanimate objects, animals, children, The Empath or spiritually touched people can sense and see through the deception and cause a Glamour Failure. The Hunter of Monsters and mundane heroes wise to these evil tells will be sure to use them to ferret out the villain from among normal people. Writers love to work these tells into The Reveal when the creature's victim finally puts two and two together. More tragically, a hero under the effects of The Virus will usually have the full emotional impact of it sink in when they can't see their reflection.
Advertisement:

These flaws in their façade are usually mixed and matched. So your mileage may vary depending on the critter:

Some supernaturals will drop their glamour on purpose and reveal their Game Face or Hiss Before Fleeing. Others will be faced with an Impostor-Exposing Test. A Monsters Anonymous group may know good ways to avoid these to blend in with humanity. When this happens on a large scale it's a Broken Masquerade. See also Virus-Victim Symptoms, and The Mirror Shows Your True Self. Contrast Hologram Projection Imperfection, for when technology is involved.