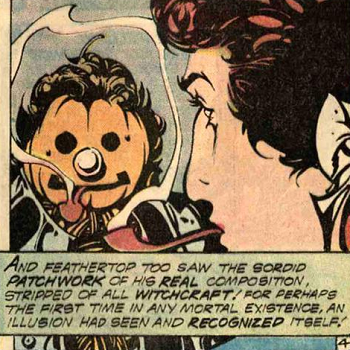 One Heroic BSoD down and one Heroic BSoD coming up.
In 1852, Nathaniel Hawthorne published the Fairy Tale-style Short Story "Feathertop". It tells about the day-long life of Feathertop, a scarecrow made by the witch Mother Rigby.
Advertisement:

Proud of her handiwork, Mother Rigby brought Feathertop to life with a magic pipe that gets its powers from Hell. Specifically, by filling Feathertop's head with smoke he gained life and from that point on he has to keep smoking that specific pipe to stay alive and maintain the illusion of a handsome human appearance. While she was at it, Mother Rigby also set out a course for him by suggesting he should woo Polly Gookin, the daughter of Master Gookin, who owed her for one thing or another. Feathertop went on his merry way and became the talk of the town as soon as he arrived, with each townsman coming up with a grander theory as to who he was. Using the magic cane Mother Rigby gave him, he found Master Gookin's house with ease and as his mother predicted, once he whispered a specific word to the man, he was at Feathertop's service. Polly, meanwhile had seen Feathertop when he arrived and was delighted to learn that the handsome man wanted to spend time with her. It went well and would've ended well if there didn't happen to be a large, truthful mirror in the room. Polly caught sight of Feathertop's reflection and fainted in shock. Prompted by her behavior, Feathertop looked too and, terror-stricken, fled the town to return to Mother Rigby's cottage. The witch asked if either Master Gookin or Polly had affronted him, but Feathertop insisted on their innocence and elaborated that he had seen himself, that he knew now what a monster he was, and that he refused to live any longer. And so, he threw away the magic pipe and fell into pieces. Mother Rigby considered reviving him, believing him no less of a hoax than people in general, but decided against it because Feathertop had made his choice clear. Instead, Feathertop's remains were repurposed to what he was originally made for: a scarecrow to protect Mother Rigby's corn-patch.

Following the story's original publication in The International Magazine, it was collected in 1854 as part of Mosses from an Old Manse. At least as early as 1908, it became a popular pick for stage, television, and movie adaptations, which sometimes go by the story's own name, Feathertop, and sometimes by the first stage adaptation's name, The Scarecrow. The play, written by Percy MacKaye, is particularly influential on how modern perception of the story came to be.