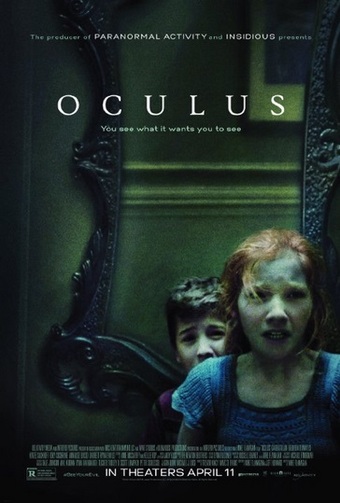 "Hello again! You must be hungry."
— Kaylie Russell
Advertisement:

Oculus is a 2013 psychological/supernatural horror film directed by Mike Flanagan (Absentia) and starring Karen Gillan (Doctor Who) in their mainstream film debuts.

In 2002, the Russell family moves into a new home, buying an antique mirror called the Lasser Glass for some new decor. Parents Marie (Katee Sackhoff) and Alan (Rory Cochrane) begin to behave increasingly oddly, and the family is soon shattered when young son Tim is accused of killing his father.

Eleven years later, Kaylie Russell (Gillan) recruits Tim (Brenton Thwaites), recently released from the asylum, to help prove the mirror's power and then destroy it. She believes it caused the deaths of their parents and scores of other people over the past three centuries. Tim's version of past events differs, offering a more realistic view of their childhood trauma.

They return to their childhood home after re-acquiring the Lasser Glass. Despite taking several precautions against the mirror's power to alter its victims' perception of reality, it refuses to go without a fight...

Has nothing to do with the Oculus Rift.

And by the events in the film. People who die at the whim of the mirror can reportedly be seen in its reflections, and victims can see "ghosts" with "mirror eyes" in its vicinity.
Feedback

Kaylie sees three sheets move in the reflection of the haunted mirror. Two of the sheets just have statues underneath them, but we never find out who or what is under that third sheet.

Example of:
"Nothing" is Scarier

Kaylie sees three sheets move in the reflection of the haunted mirror. Two of the sheets just have statues underneath them, but we never find out who or what is under that third sheet.