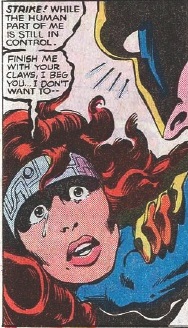 "Only... I want to die as myself. Does that make any sense? I don't want them to change me. Turn me into some kind of monster that I'm not."
— Peeta Mellark, The Hunger Games

The Corruption has taken hold of this character. Fully ahold, leaving no trace of the original. Not a time for Driven to Suicide or I Cannot Self-Terminate; there is not enough mind left. Often it's not even a matter of Mercy Kill — you have to kill in self-defense. Or Cold-Blooded Torture or Mind Rape has utterly destroyed the mind. There is nothing left. Looming death may make Mercy Kill unnecessary — but it may not.

But dying has strange effects. For just a moment, you know that this character is aware of you. This may be the point at which you recognize your friend — possibly because it coincides with This Was His True Form, with physical freedom as well as mental, but possibly just the change in expression and the like. Gratitude, expressed in the form of Go Out with a Smile or just a glimmer in the eye, is likely. Perhaps you can hold his hand so he is not Dying Alone. Perhaps he can say My God, What Have I Done? or shed Tears of Remorse, or even undergo Villainous BSoD, and you can try to console him. Some form of Last Words is sometimes possible — possibly even a Last Request. Often he will be Peaceful in Death. May sometimes lead to a Tear Jerker. This is also the way a Tragic Monster often kicks the bucket.

In some cases, this may be a physical change too, combining Evil Makes You Monstrous with No Ontological Inertia.

A form of Death Equals Redemption. Compare Died Happily Ever After, I Die Free. Contrast Fighting from the Inside. Not to be confused for This Was His True Form.

This is a Death Trope. Expect unmarked spoilers ahead.