All spoilers for The Maze Runner are unmarked. You Have Been Warned! 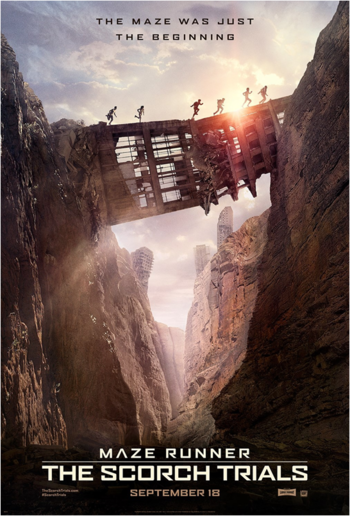 The Scorch will change everything.
"The Maze is one thing, but you kids wouldn't last one day out in the Scorch. If the elements don't kill you, the Cranks will."
— Janson
Advertisement:

Transported to a remote fortified outpost, Thomas and his fellow teenage Gladers find themselves in trouble after uncovering a diabolical plot from the mysterious and powerful organization WCKD. With help from a new ally, the Gladers stage a daring escape into the Scorch, a desolate landscape filled with dangerous obstacles and crawling with the virus-infected Cranks. The Gladers only hope may be to find the Right Hand, a group of resistance fighters who can help them battle WCKD. As they team up with them, they uncover more shocking truths, uncovering WCKD's ultimate plan for all.

This film is followed by Maze Runner: The Death Cure.