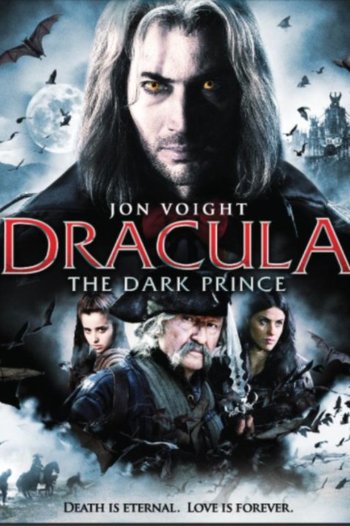 A 2013 movie starring Luke Roberts in the title role, Dracula: The Dark Prince is a very loose adaptation that borrows heavily from Bram Stoker's Dracula, though taking place in the 16th century.

Once the Prince of Wallachia and a Romanian knight to the secret Order of the Dragon, Dracula turns away to darkness after his wife Elizabeth is murdered by his advisers, while he was fighting against Muslim invaders. Now he governs over the region as a cruel and heartless vampire lord from his invisible castle that no one can find.

Fastforward to the 16th Century, two Crusader sisters Alina and Esme are tasked with delivering Leonardo Van Helsing a mysterious staff that is said to be the only weapon capable of killing Dracula called "Lightbringer". On their way, they are accosted by a band of thieves lead by Lucien and promptly attacked by a group of knights lead by a dark figure known as Wraith, who kidnaps Alina and takes her to his master. Dracula finds an uncanny semblance to the female warrior with his long-dead wife and the two start to fall in love with each other.

Meanwhile, Esme embarks on a quest to rescue her sister with the help of Lucien (who is revealed to be the only one capable of wielding the Lightbringer) and Van Helsing. But can the heroes stand in the way to love that managed to survive the ages?

Not to be confused with Christopher Lee's similarly named Dracula: Prince of Darkness or Dark Prince: The True Story of Dracula.