Film / Dracula: Dead and Loving It 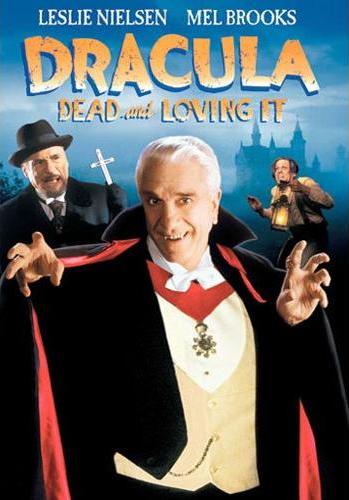 "My God! What are you doing to the furniture?"
Advertisement:

Dracula: Dead and Loving It is, as of this writing, Mel Brooks's last movie, released in 1995 and starring Leslie Nielsen as Dracula.

The story begins as a young solicitor from London, Thomas Renfield (Peter MacNicol), meets the mysterious Count Dracula. He begins to suspect that something is amiss, but the Count hypnotizes him before he can escape. The pair then travel to London, where the Count has purchased a manor next to an insane asylum. He meets his next-door neighbors at an opera: Dr. Seward (Harvey Korman), his daughter Mina (Amy Yasbeck), her friend Lucy (Lysette Anthony), and Mina's fiance Jonathan Harker (Steven Weber). Shortly thereafter, Lucy becomes mysteriously ill. This prompts Dr. Seward to seek advice from his old friend Dr. Abram Van Helsing (Brooks).

Van Helsing informs Jonathan and Harker that they have "entered ze realm of ze supernatural!" and that Lucy is the victim of a vampire attack. It is imperative that the vampire is stopped before Lucy dies, or she vill become vun herrself! Sadly, Lucy does indeed die and rise again as a member of the evil bloodsucking undead. This finally convinces Harker and Dr. Seward that there is a vampire in their midst. They set off to stop him...just as Mina begins to develop the same symptoms that Lucy had before she died.

All along the way, Hilarity Ensues (literally, in this case).

As a freshly turned vampire, Lucy becomes more comfortable with her feminine allure, much to Jonathan's fumbling distress.

Example of:
Vampires Are Sex Gods

As a freshly turned vampire, Lucy becomes more comfortable with her feminine allure, much to Jonathan's fumbling distress.