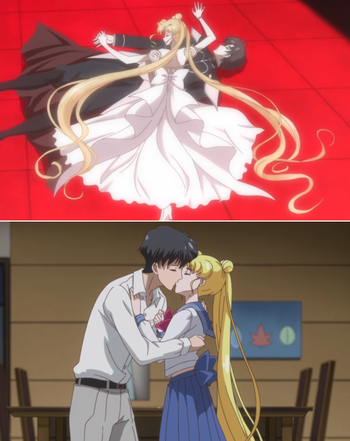 A second chance for these mooncrossed lovers.
"It's almost like I knew this man from another life
Like back then maybe I was his husband
And maybe he was my wife..."
— India.Arie, "The Truth"
Advertisement:

You know the drill. "A love so strong it conquered time!" (and took no prisoners!)

Two people love each other so deeply, and are tied by the Red String of Fate so closely, that they will meet and fall in love every time they reincarnate, lifetime after lifetime.

This is a very old trope. It is common in stories for the Shōjo Demographic and Eastern romance, where belief in reincarnation is more prevalent. This is sometimes used in Western stories to give Star-Crossed Lovers a second, more successful go after things go south in the story, an alternative to Together in Death for making a Downer Ending into the good kind of ambiguous ending.

It can get interesting if the genders reverse, or only one of theirs does. Infidelity is usually a complete non-issue; their love is so strong they may not even date at all until they meet their eternal better half... unless their reincarnating romance also tends to fall into the same bad habits. Things can get wonky if one of them is or becomes immortal: they end up having to wait decades or even centuries for their loved one to return in a strange form of Mayfly–December Romance. Only very rarely will one or the other honestly fall in love with a third person.

Even more complications arise if one of the two has been brought Back from the Dead via a Resurrected Romance, rather than through reincarnation.

Compare Amnesiac Lover, Reincarnation Friendship, and Doppelgänger Gets Same Sentiment. See also Eternal Love, which describes a different kind of very long-term relationship between immortals, and Time-Travel Romance, which uses time travel instead of reincarnation to bridge the temporal gap. When handled badly, this can very easily turn into Strangled by the Red String.