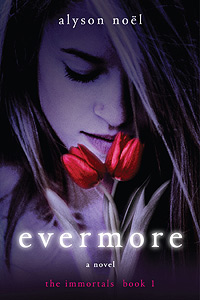 Enter a world where love never dies
The Immortals Series is a collection of young adult novels by Alyson Noël.
Advertisement:

The storyline is centered on our heroine, Ever Bloom and chronicles her romance with Damen Auguste as well as her adventures as an immortal, and the "Rogue Immortals" antagonizing them.

There is a crossover story with Soul Seekers here

The novels in the series include

Not to be confused with the Tortall Universe Immortals quartet.