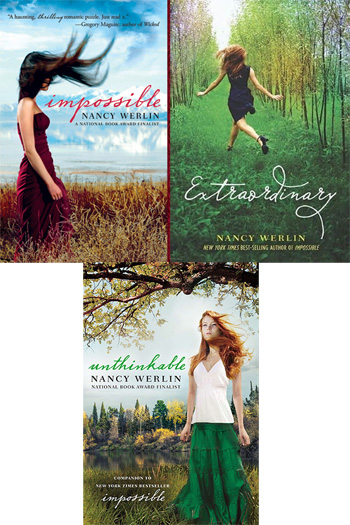 From the sting of my curse she can never be free
Parsley, sage, rosemary and thyme
Unless she unravels my riddlings three
She will be a true love of mine
Advertisement:

Impossible is a 2008 novel by Nancy Werlin.

Lucy Scarborough is seventeen years old when she learns that the women in her family have been under a curse for hundreds of years - by their eighteenth birthday, they will have a baby, and then promptly go mad. Unless, that is, they can solve three tasks described in the ballad Scarborough Fair. Lucy's ancestors have all failed at this task, but she is the first who isn't alone as she tries it. With her loving foster parents and childhood friend Zach, Lucy is in a race against time as she struggles to complete the seemingly impossible tasks.

A second book, Extraordinary, which was released in 2011, takes place in the same world, but features different characters. It focuses on a girl named Phoebe, who learns that her friend Mallory, and Mallory's brother Ryland, are actually from the faerie realm, and that they are here to collect on an age-old debt.

The third book, Unthinkable, was released in 2013. Fenella was the first Scarborough girl to fall under the curse. She rejoiced when it was broken - only to find that she was still trapped and very much alive in the faerie realm. After hundreds of years in captivity, she wants nothing more than the release of death, but she finds that she is unable to die. She makes a deal with the faerie queen to have a chance to break her life curse: she must perform three acts of destruction. What she doesn't expect, however, is that the three acts must be against her own family. There will be dire consequences for all of the Scarborough girls if she fails - but how can she choose to hurt them?