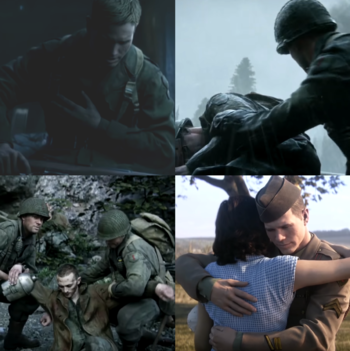 War Is Hell, but with enough determination, and a bit of luck, you'll make it home.
"I don’t think man was meant to attain happiness so easily. Happiness is like those palaces in fairy tales whose gates are guarded by dragons: we must fight in order to conquer it."
— Alexandre Dumas, The Count of Monte Cristo
Advertisement:

The basic idea of this trope is that a cast of characters in a story go through a lot more hardship, anguish, and grief than is really necessary. (Especially war.) In the end, however, you see them get their happily-ever-after. Though humans may act bad and the world may seem like it's a crapsack, that doesn't mean that people can't have a good ending, or that things can't be improved with hard work or even The Power of Love.

Not to be confused with the Golden Ending in video games, where players actually have to earn their happy ending. It is possible for both tropes to be in play at the same time, however. This trope is a specific example of positive Laser-Guided Karma.

Going by the memes, if a Crapsack World is Grimdark and a world where Rousseau Was Right is Noblebright, then a story where this happens might be called "Nobledark"

- it's a world where there is a lot of ugliness and pain, but victory is absolutely possible and things can change for the better if you only put the effort in.

There may be some overlap with Bittersweet Ending or Surprisingly Happy Ending. Compare Earn Your Bad Ending (the game-exclusive polar opposite), Happily Ever After (a Super-Trope to this) and Throw the Dog a Bone. Contrast Downer Ending.

As this is an ending trope, assume examples will be spoilertastic.