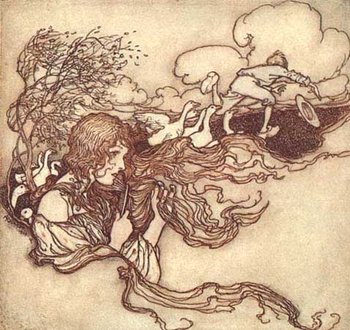 The Goose Girl is a German Fairy Tale collected by The Brothers Grimm.

The beautiful only child of a widowed queen is sent off to marry the prince to whom she is betrothed. Before she leaves, her mother presents her with a small token; some versions say it is a lock of the mother's hair, others have it as a handkerchief with drops of the mother's blood. In any case, this token provides her with magical protection. She is also presented with Falada, a magical horse with the ability to speak.

However, the maidservant who accompanies the princess treats her very brutishly, and when circumstances cause the princess to lose her token, the maid seizes the opportunity to force the princess into trading places. She makes the princess switch clothes with her, and tries to ride Falada, though in most versions he refuses and the maid has no choice but to continue riding her ordinary horse. The maid further extorts a vow from the real princess that she will never tell a living soul what has happened, on threat of death.

Once they arrive in the prince's kingdom, the false princess says that Falada was a very ill-tempered mount and demands that he be executed (so he can't speak up and reveal the truth). She also wants the true princess nowhere near her, and says that the king can make her whatever sort of servant he pleases. The true princess, grieving for Falada's death, manages to persuade the groom to have the horse's head mounted above one of the palace gates where she can still see it every day.

The true princess is so lovely and delicate that no one can bear to give her hard work, so they send her out with the goose boy. In the morning and in the evening, she sighs over her horse's head and it responds. During the day, she tries to comb her hair, but it looks so much like real gold that the goose boy is convinced that it is, and tries to steal some; she uses a little rhyme to summon the wind to blow the goose boy's cap away, making him chase it and letting her comb her hair in peace.

After three days of this, the goose boy complains that he won't work with her any more, and his report catches the ear of the king (who is not at all impressed with the false princess). He approaches the goose girl, but she is bound by her promise not to speak of her misfortunes to any living creature - so he kindly suggests that she unburden herself to the iron stove in the palace kitchen. While she does that, the king sneaks up to the roof and listens at the chimney in order to hear the truth. Now aware of the deception, the king sends the true princess to the royal household to be dressed properly, and then he brings her to a great banquet. She makes so fine an appearance that even the false princess does not recognize her.

The king asks the guests what sort of punishment would be fitting for someone who has deceived everyone around them, and proceeds to describe the situation in a way that does not reveal anyone's identity. He turns to the false princess for her opinion, and she recommends an exceptionally cruel and gruesome style of execution. He then condemns her to the very death she has suggested, introduces his son to the true princess, and the young couple are delighted with each other and marry the next day.

In some versions, the princess is the daughter of a fairy or other magical being, who restores all her fortunes once she is married, including bringing the dead horse back to life.

A Gender Flip is found in both the Chivalric Romance Roswall And Lillian and the Child Ballad "The Lord of Lorn and the False Steward". The Romanian fairy tale "Harap Alb" ("White Slave") by Ion Creanga also has the prince/evil servant switch as its main plot.

In 2003, Shannon Hale wrote a young adult novel retelling of the story, which was so successful that she ultimately wrote three sequels, creating the Books of Bayern series.

. Andrew Lang's version, found in The Blue Fairy Book, can be found here