Oblivious to His Own Description 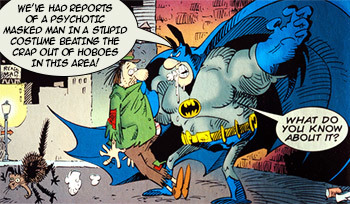 How did this clown ever wind up in Detective Comics?
"What's a raccoon?"
— Rocket Raccoon, Guardians of the Galaxy (2014)
Advertisement:

Character comes across some kind of definition that the audience, or other characters, know to be right about him. The character is the only one who is unaware of that.

Usually Played for Laughs. May come in a variety of ways:

An embarrassed or hypocritical character might act like this while keeping quiet about knowing the description is accurate ("I'm sure I don't know what you're talking about"). A disguised character might pretend to be oblivious but compliment himself while at it.

Compare Calling Me a Logarithm, Failed a Spot Check, I Resemble That Remark!, Stealth Insult, Tomato in the Mirror, and "Where? Where?".

Yes, Ozpin, you really are THAT incompetent.

Yes, Ozpin, you really are THAT incompetent.