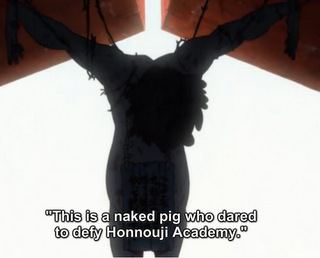 "As such, justice was dealt."
Tywin Lannister: And if any should defy you—
Tyrion Lannister: [rolls eyes knowingly] Heads. Spikes. Walls.
— A Song of Ice and Fire
Advertisement:

Rather than being given a decent burial in a nice, convenient out-of-the-way location, a dead person is instead presented for all the world to see. There are a variety of possible reasons for this treatment:

All variants are, of course, Truth in Television. The practice of "lying in state" (publicly displaying the body of a head of state or other high dignitary) exists to convince the public that rumors of the person's death are not exaggerated and to allow friends, family, and followers to pay their last respects, while criminals, rebels, and pirates have traditionally been executed and displayed in a number of gruesome ways (hanging, crucifixion, etc.)

A Sub-Trope of Due to the Dead, although if the subject on display is being dishonored the intention is more Last Disrespects. The motives of those who come to see do not have to match those of the characters who display the body; they can throw rotten eggs at a body exposed for reasons of respect, or lay flowers at one exposed as a criminal. Overlaps with Public Execution, which is a primary method of getting the guy dead in the first place.

Human Head on the Wall is a Sub-Trope.

Contrast Come to Gawk, for the living. Compare Decapitation Presentation. See also Wax Museum Morgue, where the bodies are kept on display without anyone knowing their true nature. Opposite of Disposing of a Body, when a murderer has obvious reasons for not wanting anyone to see the corpse.

After Nari was found by the Inquisitors, they killed him and put him on display in Tatooine as a warning to the locals not to help anyone who's a Jedi.

After Nari was found by the Inquisitors, they killed him and put him on display in Tatooine as a warning to the locals not to help anyone who's a Jedi.