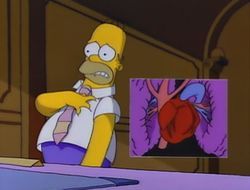 When it comes crashing down and it hurts inside...
Advertisement:

Years of fatty foods and minimal exercise have taken their toll on Homer's heart and Dr. Hibbert advises Homer to get an artery bypass graft for $40,000. With the family unable to afford the operation, much less even (in)adequate medical insurance to cover the cost, Homer is forced to turn to Dr. Nick's $129.95 hack-job to save his life. Can Lisa and her newfound knowledge of cardiology save the day?

Example of:
Suspect Is Hatless