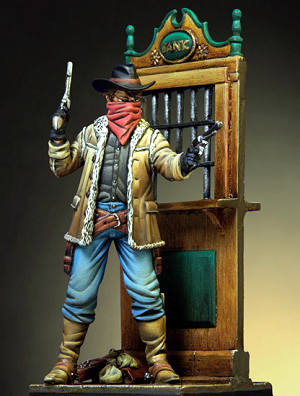 Iorek might as well be a seal now, or a walrus, not a bear. Or worse: Tartar or Skraeling. They wouldn't fight him honourably like a bear; they'd kill him with fire-hurlers before he got near. Not a hope. No mercy.
—Lee Scoresby, Northern Lights
Advertisement:

A fugitive from justice into the wilderness.

The term "outlaw" reaches back to at least Old Norse; it denotes a person who has been declared guilty of a crime in absentia and has chosen to escape for whatever reason, and is thus placed outside the protection of the law. Members of the community were forbidden to aid or abet the outlaw in any way lest they suffer the same punishment as the outlaw, and as they were outside the protection of the law, they had no legal rights, meaning anyone could kill them with impunity. Thus, the outlaw could not live in the community, but was forced to flee to the wilderness or another country to try to survive until their sentence of outlawry expired or their relatives could somehow lift it. At the time, there were no established prisons or dedicated police, so long-term imprisonment was rare. In the medieval age, an outlaw was called a "wolfshead," meaning that he or she was equated to a wolf in the eyes of the law, and was to be hunted down like one.

Several of the Icelandic sagas have outlaws as main or supporting characters, even attributing the initial settlement of Iceland to outlaws from Norway. And some versions of Robin Hood will have this be the explicit status of the Merry Men.

By the time of The Wild West, prisons and organized law enforcement were in place, so the old practice of outlawry was obsolete, but the term continued to be used for those who chose to flee into the wilderness or other jurisdictions to escape punishment for their crimes. In The Western, the outlaw is not completely removed from the protection of the law, but is wanted for crimes that make it impossible to stay in the community. Often, he will have a price on his head, making him the prey of the Bounty Hunter. Most outlaws will continue to lead lives of crime while in the wilderness, unless unjustly accused. An individual outlaw, or the leader of an outlaw gang, will often overlap with The Gunslinger. Other members of an outlaw gang will generally be the Western's equivalent of the Mook. If the Outlaw is the protagonist, or otherwise meant to be sympathetic, expect them to be either shown as having a Robin Hood-like code of ethics as to who they rob, being an innocent person falsely accused, or an Anti-Hero who does "what he has to do" to survive in a lawless land.

The outlaw and the lawman weren't entirely separate, either; some outlaws eventually settled down and tried to go straight, and their gun skills made them useful as law enforcement in particularly violent communities. Conversely, dirty cops have existed then as now, taking bribes from criminals or extorting people they were supposed to protect etc.

As of the Twenty-First Century, the meaning of "outlaw" has continued to suffer linguistic decay; now it is often used by media to mean any criminal, or to add a "rebel" cachet to something (like "outlaw country music" or "outlaw motorcycle club").

Super-Trope to the Bandito and The Most Wanted. Compare Pirate, who fills a similar archetype as the Outlaw but on the high seas of the Caribbean in the 17th and early 18th centuries.