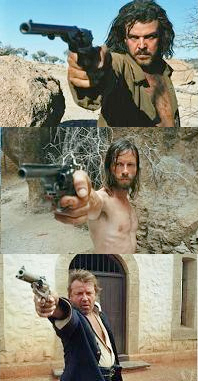 Arthur, Charlie, and Cpt. Stanley all threaten the camera.
Cpt. Stanley: Now, suppose you tell me what it is I want from you?
Charlie Burns: You want me to kill me brother.
Cpt. Stanley: I want you to kill your brother.
Advertisement:

The Proposition is a 2005 film directed by John Hillcoat and written by Nick Cave, who also composed the soundtrack with his Bad Seeds bandmate Warren Ellis. The film is a Western set in colonial Australia in the 1880s, and was described by Cave as a story full of beautiful sadness and longing, intercut with moments of intense violence.

In the rural outback, Irish criminals Charlie Burns (Guy Pearce) and his younger, mentally handicapped brother Mikey are caught by Captain Morris Stanley (Ray Winstone) and his troopers. Stanley offers a deal: Charlie has until Christmas Day to find and kill his older brother Arthur (Danny Huston), leader of the feared and depraved Burns gang, or else Mikey will be hanged by the local authorities. As Charlie faces the question of which brother will live and which will die, Captain Stanley fights to bring civilisation — and perhaps justice — to the brutal, desolate landscape.

Cave, Ellis, and Hillcoat also collaborate on the 2009 film The Road, and again on 2012's Lawless.

This Aussie Western includes examples of: