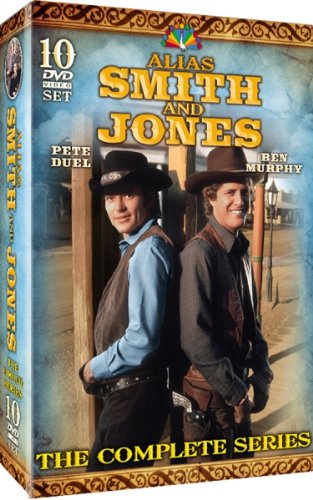 "And of all the trains and banks they robbed, they never shot anyone..."
Advertisement:

Alias Smith and Jones is a 1971-73 TV western starring Pete Duel as Hannibal Heyes and Ben Murphy as Jedidiah "Kid" Curry, a pair of bank and train robbers who never hurt anyone during any of their robberies.

Eventually they tire of the outlaw life and petition for an amnesty. The governor agrees to clear the charges against them — after an unspecified period of time — as long as they can keep their noses clean. They change their names to Joshua Smith and Thaddeus Jones and begin Walking the Earth.

The series was clearly inspired by Butch Cassidy and the Sundance Kid, to put it politely; Butch and Sundance try at one point for the same sort of deal that Heyes and Curry provisionally get, but the movie’s authorities don’t bite, and the whole “two likable rogues always on the run” thing is a slightly Lighter and Softer version of the movie set-up. Not to be confused with Alas Smith and Jones, a British sketch show named in parody of it.

"I sure wish the Governor'd let a few more people in on our secret!"