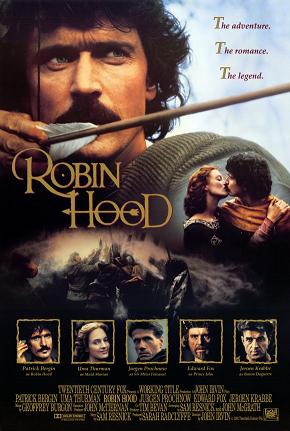 The year 1991 saw the release of two films based on the Robin Hood legends: this one and the much better-known Robin Hood: Prince of Thieves.

Directed by John Irvin and produced by 20th Century Fox, it was relegated to television in the United States but received a theatrical release abroad.

Simply called Robin Hood, it stars Patrick Bergin as Robin and Uma Thurman as Maid Marian. Other cast members include Jürgen Prochnow and Jeroen Krabbé as the villains, Owen Teale as Will Scarlet, Jeff Nutall as Friar Tuck, and David Morrissey as Little John.

Sir Robert Hode is outlawed after he saves a poacher and makes an enemy of Sir Miles Folcanet (Prochnow) and Baron Roger Daguerre (Krabbé). Calling himself "Robin Hood", he becomes the leader of a band of outlaws called the Merry Men. They take their revenge on the establishment by robbing the rich, while also giving to the poor. Robin also falls for Marian, Baron Daguerre's niece who is promised to Folcanet, and the feeling is mutual. The tensions between Normans and Saxons also play a part.