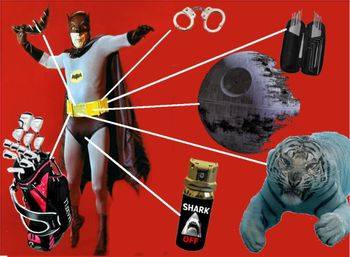 It's like a Wal-Mart you clip around your waist!
Robin: Where'd you get a live fish, Batman?
Batman: The true crimefighter always carries everything he needs in his utility belt, Robin.
— Batman
Advertisement:

Gadgets are a requisite for any Badass Normal Superhero or Batman Parody, especially if he's Crazy-Prepared. But where does he keep all of his wonderful toys? Why, in his Utility Belt, of course!

Stuff that might be found in a Utility Belt:

Contrast with Too Many Belts, where the belts are fashion accessories which Do Nothing.

Not to be confused with Rob Liefeld's pouches, which are NEVER USED.