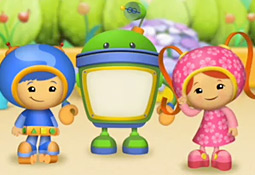 Team Umizoomi is a computer-animated Edutainment Show, with a focus on teaching beginning math concepts to preschool children. The main characters — Milli, Geo, and Bot — are three miniature heroes who live in a statue in Umi City. They help (real) children with their dilemmas, all of which require solving various counting, addition, and geometric challenges to do so. The viewer is addressed as their "UmiFriend" and incorporated into their adventures.

As superheroes, each team member has their own unique powers: Geo can create any object by assembling the appropriate geometric shapes from his belt, Milli has prehensile ponytails and can project patterns, and Bot is a multipurpose Do-Anything Robot. They typically travel around town in their orange self-driving UmiCar.

The show premiered on Nickelodeon in 2010.