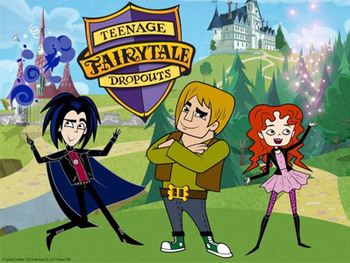 Jeremiah's not so giant
Fury hasn't got her wings
Trafalgar, he just keeps on trying
But his spells don't help a thing

A Mexican/Irish/Australian/American co-production that originally aired on 7TWO. The series takes place in a fairy tale-like setting. Three best friends, Jeremiah, the son of the giant in Jack and the Beanstalk, Trafalgar, the nephew of Merlin the Wizard, and Fury, the daughter of Tooth Fairy, live through a tough life as teenagers and are determined to be themselves, despite their parents' orders and their fairy tale origins.

Briefly played in the U.S on The Hub but it's run was cut short due to the switch over to Discovery Family and the network ditching most of their shows.

A: Imcompetent to raise or care for a child properly B: Careless about their child's problems. C: Both