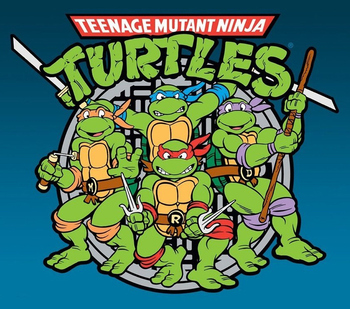 The first animated series starring the Teenage Mutant Ninja Turtles, and the one responsible for the worldwide phenomenon spurred by the franchise. It lasted from 1987 to 1996; the first three seasons and for half of Season 4 it aired in syndication via Group W/Westinghouse, and after that it moved to CBS' Saturday morning lineup, and ironically, CBS and Westinghouse merged in 1995.

The story goes something like this: Hamato Yoshi and Oroku Saki were members of the Foot Clan. Out of jealousy, Saki compromises Yoshi's position in the clan and forces him into exile. Escaping to the New York sewers, Yoshi eventually makes pets of rats living there, as well as four baby turtles which happened to fall inside.

One day, Yoshi finds the turtles immersed in pink-colored ooze, which he gets all over himself while trying to clean it off. Soon, he finds the turtles growing to humanoid size, and himself turning into a humanoid rat; the ooze, which had been spilled by Saki in order to kill Yoshi, was a mutagen that would grant an organism traits from the previous organism it had come into physical contact with. Yoshi decides to raise the turtles, name them, and train them in the martial arts.

Eventually, the turtles rescue April O'Neil, a reporter covering a crime wave seemingly committed by ninjas. With her help, they discover that Oroku Saki, now calling himself the Shredder, had taken control of the Foot Clan, and had allied himself with exiled extradimensional warlord Krang in order to conquer the world. The turtles, naturally, vow to stop him, and obtain a way to restore Hamato Yoshi—now named Splinter "for obvious reasons"—to his human form.

Unlike the comic book that inspired it, the tone of the cartoon was for the most part more akin to a sitcom than an action series. The turtles were more liable to crack wise than act like the ninjas they supposedly were. The main villain group shared a sitcom dynamic, with Villain Decay setting in almost immediately. Many episodes were Strictly Formula, using whatever stock plots the producers had handy.

After seven seasons, the series was retooled in an attempt to make them more serious. The palette was darker, the Shredder and company were eventually Put on a Bus and were replaced by the alien Lord Dregg and his posse, and the tone became less humorous. Reactions to the "red sky" seasons remain mixed; while some appreciate the shift, others believe it took away from the series' strengths. This new direction lasted for three 8-episode seasons, until the series' end in 1996.

Despite—or perhaps because of—the numerous changes made to the source material, the series became wildly popular, providing the thrust behind a massive toy line, inspiring the Teenage Mutant Samurai Wombats cartoon subgenre, and even getting a two-part OVA in Japan. The series continues to influence the franchise today, with every later incarnation of the turtles maintaining at least part of the tone of the series, as well as multiple nods to it.

Thirteen years after its end, the series was revisited in Turtles Forever, a crossover between this incarnation of the Turtles and their counterparts from the 2003 series, though contractual issues meant that these Turtles had new voice actors. The 2012 series is essentially a modernized reboot of the 1987 series since it utilizes and/or modifies characters and elements from it. The 2012 series also includes a few appearances by the 1987 Turtles with their old voice actors intact (and Rob Paulsen, who voiced Raphael in this show, regularly voices Donatello in the 2012 one).

This incarnation of the Ninja Turtles includes examples of:

Krang makes his first appearance in "Enter the Shredder", though he wouldn't get his robot body until the fifth episode.

Krang makes his first appearance in "Enter the Shredder", though he wouldn't get his robot body until the fifth episode.