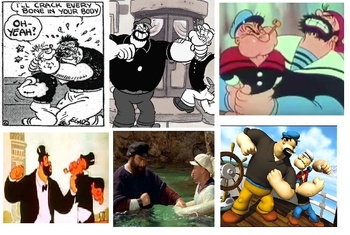 "Y'know the thought occurred to me that we are rather Claw-centric. Have we ever thought of going after ISIS? Drug lords? The people who made the Madea movies?"
— The Nostalgia Critic (as Inspector Gadget), Inspector Gadget Saves Christmas review
Advertisement:

Some works use the villain as part of The Law of Conservation of Detail: he or she will fulfill almost exactly the same role in every single episode. A single antagonist, always having the same function in the plot.

Pretty much a Dead Horse Trope nowadays as most shows, even those directed toward children, tend to prefer a Story Arc thus having at the very least an Arc Villain. The original idea, especially among cartoons, was that children lack the attention span to handle complex arcs and plots throughout a season, thus every episode was more or less self-contained with the exception of multiple-part episodes and the mandatory Clip Show. It is still used sometimes among shows for small children. But remember, Tropes Are Not Bad.

The opposite of a Rogues Gallery, when a hero faces a broad variety of villains throughout the series. The other extreme is a Monster of the Week format when a show has no recurring villain and there's one Different in Every Episode. Compare with Once per Episode, Every Episode Ending and Strictly Formula.