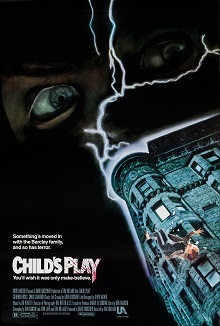 The first film of the Child's Play franchise.

For his birthday, 6-year-old Andy Barclay (Alex Vincent) gets the "Good Guy" doll he saw advertised on TV. Little did Andy know that the doll, later to be known as Chucky, is actually a Soul Jar for the Serial Killer Charles Lee Ray (Brad Dourif). His babysitter Maggie Peterson (Dinah Manoff) is only the first of several people to die. His mother Karen (Catherine Hicks) has to find what is going on in time to save her son from becoming Charles' next host.

A remake directed by Lars Klevberg was released on June 21st, 2019—featuring Mark Hamill as the voice of Chucky, Aubrey Plaza as Karen and Gabriel Bateman as Andy.