Film / Masters of the Universe 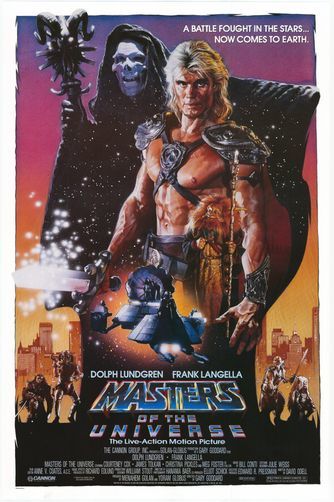 "I have the power!"
"At the center of the Universe, at the border between the light and the dark stands Castle Greyskull. For countless ages, the Sorceress of Greyskull has kept this universe in harmony. But the armies of darkness do not rest, and the capture of Greyskull is ever most in their minds. For to those who control Greyskull will come . . . the Power.

the Power to be . . . MASTERS OF THE UNIVERSE!"
— Opening Narration
Advertisement:

A 1987 film directed by Gary Goddard for The Cannon Group, based upon the franchise of the same name.

The movie features Skeletor acquiring the Cosmic Key, a teleportation device from Gwildor, an eccentric inventor, which gives him an edge in his war against He-Man. Eventually the heroes find an identical device and use it to escape capture, accidentally traveling to a distant planet — Earth. Skeletor is not far behind. Starring Dolph Lundgren as He-Man and Frank Langella as Skeletor, Meg Foster as Evil-Lyn and a young Courteney Cox and Robert Duncan McNeill as teenage sweethearts Julie Winston and Kevin Corrigan, who are caught up in the events.

A fictionalized version of the making of the live-action film was later used as the basis for a story arc in Paul Chadwick's Concrete. Additionally, there's no Prince Adam in this version, only He-Man, in keeping with its early origins: Adam originally didn't exist in the toy line or the (pre-Filmation) mini-comics that came with it. Besides the original line of toys made when the movie came out, in 2019 a high-end set of action figures based on the movie was announced.

Example of:
Drunk on the Dark Side