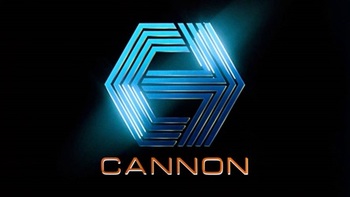 "No other production organization in the world today—certainly not any of the seven Hollywood 'majors'—has taken more chances with serious, marginal films than Cannon."
— Roger Ebert, 1987
Advertisement:

The Cannon Group, Inc. was an American movie studio that operated many companies, including Cannon Films. It was founded in 1967 by investors Dennis Friedland and Christopher C. "Chris" Dewey and specialized in many low- and medium-budget films. They additionally owned cinema chains in Europe (including in the UK) and Israel and a home video label. The company is most well known throughout its heyday of the 1980s under the leadership of Israeli-born producers Menahem Golan and Yoram Globus, colloquially known as "Golan-Globus".

In the early years, under the leadership of Friedland and Dewey, the Cannon Group was a tightly run organization, producing exploitation films on very low budgets and sometimes No Budget. Films had their budgets capped at no more than $300,000. After the Sleeper Hit Joe (1970), throughout The '70s the company lost money from unsuccessful films whose descriptions often resembled softcore pornography. With these issues, it would become apparent that Friedland and Dewey would have to sell their studio.

This came to be in 1979 when Friedland and Dewey sold Cannon to Menahem Golan and his cousin Yoram Globus, two Israeli film producers seeking to expand into the wider market open to Hollywood studios. Under their new leadership of the Cannon Group, they moved the company's operations to Southern California and refocused its business model around acquiring scripts for lowbrow films and B-movies, most of them in the action genre, that would go into production and recoup their budgets prior to release by pre-selling foreign distribution and home video rights. This was what became the new focus of the company throughout the 1980s. The company did, however, have a more diverse amount of genres to cover with its films, including urban comedies (often inspired by dance fads), musicals, Holocaust dramas, Speculative Fiction, and even fairy tales. This allowed the Cannon Group to release a large number of films every year in this heyday. Quantity over quality was the avowed aim at Cannon, and sequels to hit movies were put quickly into production.

In 1986, the Cannon Group reached its peak, with 43 films in the calendar year alone, several times greater than the output of any of the major studios. Cannon paid top dollar to sign Sylvester Stallone and Christopher Reeve for starring in two pictures each. To soften the backlash against its B-movies, Cannon commissioned higher-aiming films from such famous directors as John Cassavetes, John Frankenheimer, Jean-Luc Godard and Franco Zeffirelli, which were financed by packaging them with their more lucrative films in the pre-sales market. It also received a critical success in the Dutch film The Assault, which gave Golan-Globus both the Academy Award and the Golden Globe for Best Foreign Langauge Film of the year. It also was able to secure a deal with producers Alexander and Ilya Salkind to make Superman IV: The Quest for Peace, as well as with Mattel and Marvel Comics for the rights to produce film adaptations of their properties (Cannon was able to produce a Masters of the Universe movie and almost filmed a Spider-Man movie). They also acquired Thorn EMI Screen Entertainment, giving them access to a large library of (mostly British) films and theatre chains throughout Britain.

However, this was also the beginning of the bad times for the company. The Cannon Group was notoriously stretching its financial resources way too thin. Golan and Globus were being accused of reallocating money allocated for certain films over to other projects, which explained how Superman IV turned out like it did. The U.S. Securities and Exchanges Commission (SEC), in its investigation of the Cannon Group, suspected the company of misstating its budgets.

Due to this turn of events, the company began dismantling some of its Thorn EMI assets, including the library and studio lots. Cannon would ultimately be sold in the late 1980s to Italian financier Giancarlo Parretti, who immediately renamed the company to Pathé Communications in the hopes of buying out the French studio of the same name (this deal fell through, as his sketchy background raised eyebrows with the French government). This caused a massive restructuring of the company's operations to reduce its debts. At that point, in 1989 Golan left his position in the company over a feud with Parretti and Globus. While Globus continued to work with Pathé, Golan went on to form his own company (21st Century Film Corporation), whose productions included Captain America (1990) and Death Wish V: The Face of Death, which had been stuck in Development Hell at Cannon. Golan also took with him the rights to Cannon's announced but unproduced Spider-Man movie, which he would ultimately fail to realize due to myriad financial and legal difficulties.

In 1990, Parretti merged Pathé Communications with MGM/UA. Most of the Cannon Group's library is now owned by MGM, with some exceptions (mostly the films that were once owned by Thorn EMI). However, Parretti was, again, found to have been a massive fraudster who used false pretenses to get Cannon and Pathé's acquisition of MGM, causing his bank (the French bank Credit Lyonnais) to assume control of MGM-Pathé and, in June 1991, oust both Parretti and Globus from the corporate board. (Parretti would later be convicted of securities fraud.)

By this time, however, Cannon had been spun off as a new company not directly implicated in the merger fiasco. The new Cannon Pictures was introduced by Pathé as a label for the sole purpose of distributing low-budget films, only for it to be spun off in November 1990, under Christopher Pearce, a former associate producer from the Golan-Globus era. In 1992, Cannon Pictures merged with Globus's Melrose Entertainment to form Cannon Entertainment Group, which carried on the Cannon name until filing for bankruptcy in December 1994.

Golan and Globus, meanwhile, reunited in 1996 when Globus and Pearce went on to join Golan at his 21st Century Film Corporation. Golan continued to work as a director and producer until his death on August 8, 2014, while Globus is currently the head of Globus Max, a cinema chain in Israel. Also in 2014, the Cannon Group became the subject of the documentary film Electric Boogaloo: The Wild, Untold Story of Cannon Films, produced by Brett Ratner and written and directed by Australian filmmaker Mark Hartley.

Many action stars of The '80s who were Cannon regulars included Chuck Norris (who also starred in one of Cannon's few ventures into television - Cannon Television produced the first few episodes of Walker, Texas Ranger until financial difficulties thanks to Cannon's troubles got in the way, but fortunately CBS and Columbia Pictures Television agreed to foot the bill and production continued for the next several years), Charles Bronson, Dolph Lundgren, Michael Dudikoff, Sho Kosugi and Mickey Rourke. In addition, the Cannon Group first brought Jean-Claude Van Damme to worldwide audiences through his role in Cyborg (1989).

Throughout the Golan-Globus years, many films of the Cannon Group were released by Home Video Distributors such as MCA Videocassette, Inc., MGM/UA Home Video, Thorn EMI Video (which Cannon wound up acquiring and briefly renaming HBO/Cannon Video, before selling their stake to HBO amid their troubles in 1987) and Media Home Entertainment, among other companies. Today, most of these films are owned by StudioCanal, MGM, or Warner Bros., depending on the film. US TV rights to most of Cannon's films are owned by Paramount, which inherited these rights from Viacom; these rights are currently exercised through CBS Media Ventures.

Media produced and/or distributed by the Cannon Group: