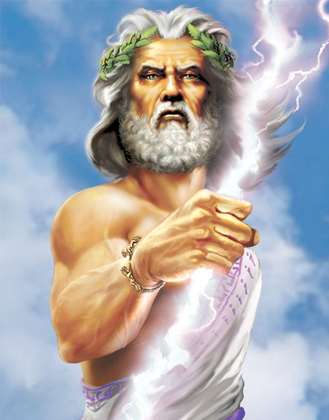 Worship me or die
"I've walked across the the sun. I've seen events so tiny and so fast, they can hardly be said to have occurred at all. But you, you are a man. And this world's smartest man means no more to me than its smartest termite."
— Dr. Manhattan, Watchmen
Advertisement:

One step below being one of the Powers That Be. Occasionally shares space with The Great Gazoo.

Mythology often depicted gods as "human, but bigger." Similar emotions, virtues, vices, etc. but with more power. Special effects and global story-telling exposure has expanded the concept. Gods are often humanoid (easier for actors to portray them) and have a number of powers. The difference between them and non-divine characters is they don't have to be "balanced" in terms of other characters. However, there are sometimes higher beings that the gods are no match for.

Typical god powers and traits can include:

Interestingly, Superman and some of the more powerful Flying Bricks fulfill most of these requirements, except possibly the worship bit. This depends on how strictly you define worship, of course, since subscribing isn't usually considered the same as tithing. (For rabid fans, subscriptions can total a lot more than 10% of your income!). Then again, Superman does share a setting with actual Physical Gods, some of whom are even stronger still than he is (Depending on the Writer, of course).

In other fiction, characters who may not strictly be gods may get powers like these simply because, in a place where Everyone is a Super, then the only way you can really mount a truly serious threat to a world with millions of super-powered civilians is to give the baddies even more absurdly powerful abilities.

Sometimes, a human can become a Physical God, especially if it's possible for said gods to die. These newly minted gods may choose to take up the mantle with solemnity, cackle madly that "A God Am I!", or steadfastly say "A God, I Am Not" from lingering sympathy to their human origins.

The existence of a Physical God presents a superficial difficulty to a Flat-Earth Atheist; however, the problem can be overcome by distinguishing a Physical God from whatever Powers That Be might or might not exist in the universe (considering the former to be "merely" ultra-powerful beings not different in principle from anybody else who happens to have similar levels of power, and applying the label "god" only to the latter. The non-trivial difficulty in determining the difference when such beings can only be viewed from a limited human scale is often brushed under the rug). Smarter Flat Earth Atheists will turn into Nay Theists instead...or welcome the new divine overlord....

Compare Reality Warper, Eldritch Abomination, Anthropomorphic Personification, Abstract Apotheosis, Deity of Human Origin, Ultimate Life Form, and Sufficiently Advanced Alien. See also Our Gods Are Different for a more general trope. God in Human Form for a humanoid deity rather than vice-verca, and Humans Are Cthulhu, for when Puny Earthlings are seen as this by other creatures. They're usually the center of a Physical Religion. When all that power amounts to nothing, see God's Hands Are Tied. God Job is when a mortal gets to become this. If these characters get defeated by a weaker one, it's Did You Just Punch Out Cthulhu?.