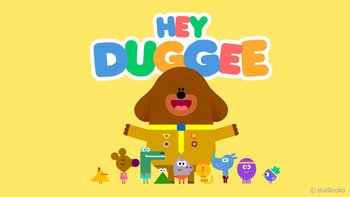 Hey Duggee is an Edutainment Show made by Studio AKA for The BBC.

Duggee is a Duck Terrier (?) who has a lot of badges and makes a group called The Squirrels. They are a rhino named Tag, a hippo named Roly, an octopus named Betty, a mouse named Norrie, and a crocodile/alligator named Happy. They earn badges, so that equals this BBC/CBeebies/Nickelodeon treat.

Isn't it time for Duggee's tropes?