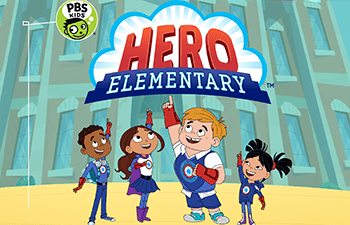 Hero Elementary is a PBS Kids show that premiered on June 1, 2020. Created by Christine Ferraro and Carol Lynn Parente (both of whom worked on Sesame Street), Hero Elementary centers around a school for budding superheroes, where kids learn to master their innate powers, like flying and teleportation, while exploring science along the way. Targeted to children aged four to seven, the series features important tools to help them solve problems by encouraging them to think and act like scientists, igniting their natural curiosity. Hero Elementary also showcases character and social-emotional concepts such as kindness, empathy, and commitment to working together to solve problems.

The "Sparks' Crew" includes Lucita Sky, an empathetic natural leader with the power to fly – and a fear of heights; AJ Gadgets, a superhero who is passionate about all things “super” and has the ability of thought projection and making super gadgets – and who also happens to be autistic; Sara Snap, who’s tiny, but mighty, with super strength and the power to teleport; and Benny Bubbles, a loyal and protective animal lover with a heart of gold, who can create amazing bubbles that double as force fields and more. Both Mr. Sparks and Lucita are bilingual Spanish/English speakers. Rounding out the crew is Fur Blur, the class hamster with an epic appetite and super speed. Their teacher is the quirky and enthusiastic Mr. Sparks.

that has games, videos, and tidbits of series lore.

Not to be confused with the Hero Academy trope.

Tropes associated with the show:

We all belong at Hero Elementary!