Animals Not to Scale 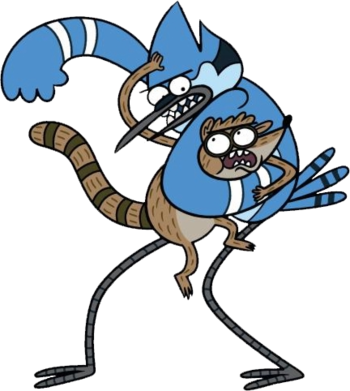 A bluejay three times the size of a raccoon?

This trope is about animals that are either unusually large or unusually small for their species. This is especially true of Funny Animals, which tend to be within normal human size ranges. Thus a small animal (say, a mouse) will be about as tall as a very short person or an average housecat, which is gargantuan compared to the actual species, while a big one (say, a bear) would be as tall as a normal person.

This is a common Artistic License for various reasons, and can be easily ignored when either only a single individual is out of scale from its Real Life counterpart, or when all animals are consistently larger or smaller than Real Life. This trope focuses primarily on animals who are not merely depicted on a different scale from Real Life, but on different scales from each other.

There are two variants:

The examples can range anywhere on the Sliding Scale of Anthropomorphism from Nearly Normal Animal to Beast Men. Shows with animal protagonists of many species will often have them all roughly the same size (with occasional slight variations as a nod to which species are larger; otters being One Head Taller than fieldmice, for example). Less-humanised species may get a pass, with predators being considerably larger and pets being smaller.

This often can overlap with Kaiju (giant Japanese monsters).

Sometimes (but not always) overlaps with Dire Beast. See also Furry Confusion, Your Size May Vary.

Examples That Show Both Variants: