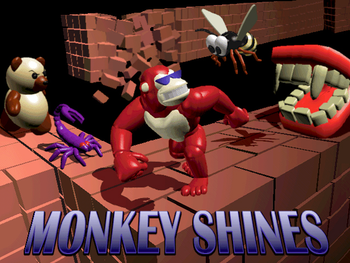 Monkey Shines is a 1997 Shareware platform game created by Fantasoft LLC for Apple Macintosh, with a Windows version following in 1998.
Advertisement:

It features an ape named Bonzo who always seems to get himself into trouble. He finds himself through several different worlds, where everything tries to kill him. The enemies include monsters, animals, plants, aliens and simple household objects, depending on the world you're in. To complete a world, you have to collect all the red keys within it, unlocking the "exit" door which will be opened somewhere in the world. There are also fruits, which give you points, blue keys, which open bonus levels, and other Power Ups.

As a shareware product, unregistered players could only play the first world in the game, and only for thirty days. The game features five original worlds in total:

The Macintosh version also featured a Level Editor (only available for registered users), where players could modify the existing worlds or create worlds of their own. While there was no level editor for Windows, many levels created by Mac users were converted for the Windows application, and they were downloadable on the game's now defunct website

, although you can still find some of them on the internet.

The game doesn't seem to run on any of the usual Mac emulators like Basilisk or SheepShaver, but never fear — a fan of the game recreated it, music and all,

as a Java app, and it's open source under the GPLv3.

Not to be confused with the 1988 horror movie of the same name.