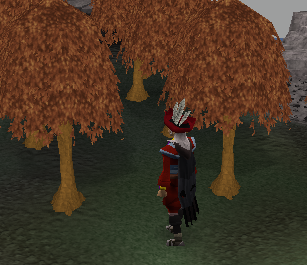 In Real Life, the smallest maple trees will still grow to about five times the height of an ordinary human.
Advertisement:

Usually when a forest's upper trees are shorter than 15 metersnote about 50 feet in Real Life, it means that the soil is either too dry (sandy or limestone soil), too wet (bog) or just too low on nutrients to allow proper tree growth. As such, it's also common that the forest in that case is sparse.

In some media, it seems that entire forests can be very low-lying (and still can be impassably thick). Sometimes even in biomes you wouldn't expect the same to happen in real life. The reason may be due to technical limitations. Sometimes this is a result of things not being strictly to scale. Sometimes it just seems to be Artistic License.

Some try to prevent that by doing the opposite — gigantic sequoia-like forests. However, there are almost no forests (especially passable forests) which have densely packed thin and tall trees.

Related to Units Not to Scale.

Thanks to Kameks magic, the trees and everything else are tiny.

Thanks to Kameks magic, the trees and everything else are tiny.