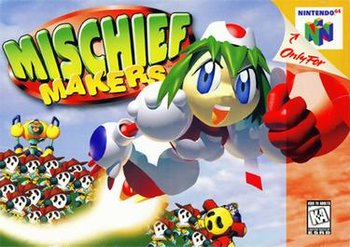 Shake Shake!
A robot maid riding a cat riding a missile, versus a member of an all-furry sentai who's riding a transforming mech? It doesn't get more Japanese than this!
— A YouTube commenter on one of the game's boss battles.
Advertisement:

Mischief Makers is the story of Professor Theo, a space-travelling Mad Scientist, and Marina Liteyears, his robot creation and assistant, marooned on the strange planet of Clancer. Soon, the planet comes under attack by The Emperor aka The Monolith and his empire; agents from the Empire kidnap the Professor for unknown reasons, and it's up to Marina to rescue him (multiple times), at times helped and at times hindered by the bizarre Clancers and threatened along the way by the Empire's goons, including an Evil Counterpart called Calina and a team of animal-like supersoldiers called the Beastector.

Mischief Makers is a 2-D Platform Game (with occasional 3-D elements) where grabbing, throwing, and, yes, shaking objects is integral to gameplay. It's more puzzle-oriented than the typical platformer; you must often go through elaborate mazes of warp points, use Clanpots to create specific items, find some specific enemy in the stage, or do any number of other, sometimes unintuitive, tasks to proceed. All play is timed, and each level has a hidden Gold Gem to find; both time and Gold Gems collected affect the ending.

The game was made by Treasure, published by Enix (pre-merger), and released on the N64, with the English translation being done by Nintendo.

Unique for an N64 game is that the Analog stick isn't used at all. The D-pad is used for all movement.

For a game that has similar gameplay mechanics (grab and throw to be precise), check out Solatorobo.