Video Game / Ogre Battle: The March of the Black Queen 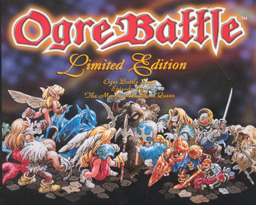 Fight it Out!
The rule of the empire was a pure regime of terror. Merciless persecution was directed against survivors of the old kingdoms and those who would escape the tyranny. The heart of the people were troubled by secrets and betrayals and much blood was spilt over the land.
Imperial Year 24 - Here on the frontiers of Sharom the last survivors of the Knights of Zenobia were planning a final challenge...
Advertisement:

The first game of the Ogre Battle series, Ogre Battle: The March of the Black Queen, is subtitled as "Episode V". Eighty years ago, five great heroes brought peace to the continent. Fifty-five years later, one of the two surviving heroes, the mage Rashidi, teams up with Empress Endora of the Highlands to assassinate king Gran of Zenobia and his family. With this, Endora unites the continent of Zeteginea into The Empire. Twenty-five years later, you play a young noble who rallies the remaining Zenobian knights to start a revolution against Endora, her son Gares, and Rashidi and his evil magic. But rumors rise that Rashidi seeks to release the Ogres from the underworld, and provoke a new Ogre Battle among humans, Ogres, demons and angels!

The game is a strange RTS. The player controls squads who travel the world map. When two squads meet, the battles are resolved automatically.

Ogre Battle: The March of the Black Queen contains examples of: