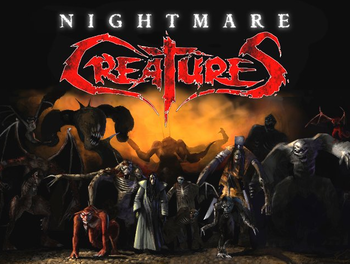 Nightmare Creatures is an Action-Adventure Beat 'em Up developed by Kalisto Entertainment, published by Activision, and released in 1997 for PlayStation, Windows, and Nintendo 64. Set in the 19th century, London is threatened by a horde of creatures released by Adam Crowley. Now it's up to Ignatius Blackward and Nadia Franciscus to combat these threats and stop Crowley and his monster invasion.
Advertisement:

A second game was released in 2000, with Konami as the publisher. Set in 1934 London and Paris, it tells the story of Herbert Wallace, a man who was captured as a young kid by Crowley, whom tortured and experimented on him. After many years, he decides to take revenge on Crowley. A mobile phone game, developed by Gameloft and also titled Nightmare Creatures, was released in 2003. A third main game, Nightmare Creatures III: Angel of Darkness, was planned, but it went to Development Hell after Kalisto went out of business. In late 2004, the game's development and release were officially scrapped.

A Continuity Reboot was announced in 2017, with Albino Moose Games, the studio behind the HD version of Spookys Jumpscare Mansion, having picked up the rights to the franchise.